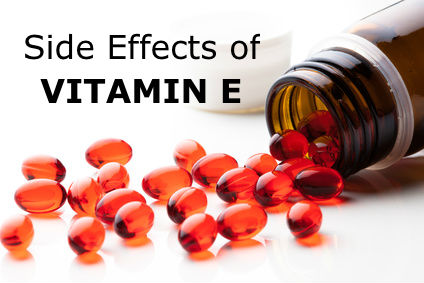 Vitamin E is essential to our bodies and is found in many foods, including olive oil, nuts, chicken, eggs, fruit, green leafy vegetables, whole grains, and meat. It is also taken in supplement form as alpha-tocopherol.

When consumed in amounts below the upper tolerable limits, vitamin E is generally considered to be safe. However, taking too much vitamin E, especially in supplement form, may not be wise.

The tolerable upper amounts that are recommended based on age:

Here are the contraindications and side effects of vitamin E:


Stomach Effects
Although rare, some people may experience digestive compaints including nausea, diarrhea, and stomach pain.

Head Effects
Dizziness, fatigue, headache, and blurry vision have all been reported.

Rash
Rash has been reported when taking vitamin E supplements, but it is more common when using vitamin E topically.

Pregnancy
Taking more than the upper recommended limit during pregnancy has been linked with a risk of heart defects in the fetus. High amount of vitamins E and C taken together during pregnancy could potentially heighten the risk of high blood pressure (gestational hypertension.)

Increased Risk of Death
While there is little chance of a sudden overdose on vitamin E, some controversial studies have found that taking large amounts of it over the longterm is associated with a slight increase in the risk of death from all causes. More studies need to be done to confirm this, but to be safe just make sure not to go above the upper limits recommended.

Smokers
One study found that vitamin E may increase the risk of tuberculosis in men who smoke and also take high doses of vitamin E.

Bleeding
Some people have reported nosebleed or excess bleeding while supplementing with vitamin A. There is a concern that people taking blood thinners such as heparin, warfarin, aspirin, and NSAIDs may have an increase in bleeding. People with vitamin K deficiency or who have bleeding disorders should not take vitamin E supplements without medical supervision.