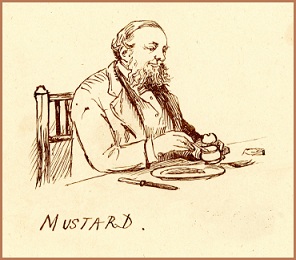 There are over 40 types of mustard plants, all of which produce seeds that can be harvested and made into oils and condiments. Black, brown and white mustard seeds are the most commonly used today. The greens of mustard are also a nutritious, edible vegetable that are eaten around the world.

Mustard was used for medicinal purposes long before its popularity rose as a culinary spice, condiment and cooking oil. Greek scientists as early as the 6th century used mustard to cure a variety of human ailments including toothache and scorpion stings.

The ancient Romans mixed crushed mustard seeds with unfermented grape juice called “must” to create a paste called “burning must” or mustum ardens, which is where we get the word mustard, a combination of the first three letters of each word. Burning must resembled the mustard condiment that we know today, but it was not widely used in Rome. The Romans exported the seed to Gaul where it gained popularity in what is now modern day France through production in French monasteries around the 9th century.

By the mid 18th century, mustard production began to resemble what it is today, though its popularity tapered off in the wake of a variety of new spices being imported from the Americas, India and the far east.

In 1856 a Frenchman named Jean Naigeon revived mustard’s popularity in the city of Dijon. He created a less acidic version by using verjuice (the juice of unripe grapes) instead of vinegar.

In the 20th century, a machine that automated mustard seed processing was invented by Maurice Grey, who then formed the Grey Poupon company with Auguste Poupon.

At the 1904 World’s Fair in St. Louis, French’s mustard was unveiled and mustard was put on a hot dog for the first time. Hot dogs have never been the same since. Today, mustard is the second most commonly used spice in the U.S.