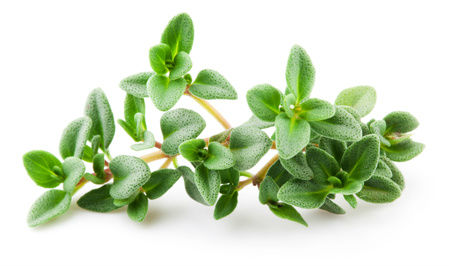 Since ancient times, thyme has been associated with courage and has been used as a natural antidepressant.

The Greek work for courage is thumus and some contend “thyme” is derived from this word.

The Romans put thyme in their bathwater to give themselves courage and strength before battle. They also used thyme to treat depression.

The Scottish highlanders drank wild thyme tea to muster courage and to ward off nightmares.

Thyme was sacred to the Druids, who used it to treat depression and ward off negativity.

In the Middle Ages, ladies embroidered images of thyme on scarves for their knights to wear in battle, believing it would give them courage.

So how did thyme get the reputation for inspiring courage and lifting the spirits? The scent of thyme is invigorating and pleasant but there may be more to it than that. In aromatherapy, thyme is considered a circulatory system stimulant and is said to raise low blood pressure, which is often a cause of lethargy and depression.

The next time you’re feeling depressed or need that extra courage and energy to face the day, try smelling a bit of thyme.