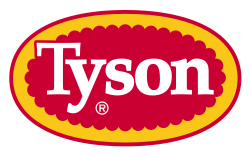 Tyson Foods claims that their chickens are raised without antibiotics. The truth is that the eggs are pumped full of an antibiotic called gentamicin and the chicks are fed antibiotic-laced feed.

If Tyson is so eager to mislead the public over this issue, it makes one wonder what other deceptive practices they follow. Here’s one: Tyson injects its packaged chicken full of water and salt to increase the weight while still labeling it “100% All Natural.” A class action lawsuit was filed against them over this in 2001.

I don’t eat chicken, but if I did I would avoid Tyson’s product.

Meanwhile, the company is planning to spread its meat across the globe:

As Tyson Foods Inc. replicates its uniquely American model of corporate meat production throughout the developing world, the company could fundamentally transform rural economies in nations such as India, Brazil and China.

In the article, Don Tyson said, “We have done about as much in the United States as we can do.”

Doing all they can do to lie to consumers and sell mislabeled, antibiotic-laced chickens injected with salt water? Mr. Tyson, I think you can “do” better.

4 Comments on "Tyson Chicken Loaded with Antibiotics and Corruption"

Sort by:   newest | oldest | most voted
Jackie
Share On TwitterShare On Google

Just wonderful. How deceitful. I will never buy Tyson again (I have always purchased large quantities)… AND…I will pass this on to everyone I know.

Vote Up
1
Vote Down
alex
Share On TwitterShare On Google

This is horrible, and the reason why I choose to eat organic. And LD, I agree. The Master Cleanse is an excellent way to detox the body from the harsh chemicals and antibiotics that are food is now laced with. Thanks for helping to spread the truth and support public awareness.

Vote Up
0
Vote Down
Anonymous
Share On TwitterShare On Google

I break out in hives when I eat chicken raised on antibiotics. Only the dark meat effects me. I assume extra antibiotics are stored in the fat. There is no problem with organic free range chickens.

Vote Up
0
Vote Down
Asha V.
Share On TwitterShare On Google

Tyson also treats their animals with amazing cruelty. Please do not purchase from them.
View videos here:
http://www.goveg.com/factoryFarming.asp