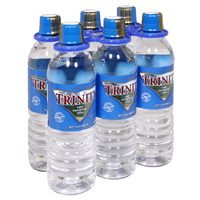 Water
May 1, 2006April 3, 2017 Tracy 86 Comments
2017 Update: Unfortunately, Trinity Water never came back into business after I wrote this article in 2008. The good news is that there are alternatives. One of our favorites is Evamor Natural Alkaline Artesian Water.

You may have noticed that it’s getting harder and harder to find Trinity water on store shelves. Rumors are flying about what happened to the popular bottled water. One person I know heard they’d been pulled by the FDA for making health claims about the minerals in their water. After I heard this, I went Googling and couldn’t come up with anything. There is no information on their site so I called their customer service line and heard the following message: “Trinity Springs is no longer in production.”

So then I tried the CEO’s extension and there was a message with a number for his Seattle office. I called this number expecting yet another message but a human being answered. It turned out to be Trinity Springs CFO Dean Barney and it was his home that I’d reached.

We talked for a little while and he explained what was happening with Trinity. It turns out it has nothing to do with the FDA and there’s nothing wrong with the water. The company is enmeshed in a bitter court battle over ownership and has subsequently run out of operating funds.

Mr. Barney, who is only one of three remaining employees at the company, will be leaving in the next two weeks. When I asked him if he thought Trinity water would be back he said, “Yes, but probably not in my lifetime.” Let’s hope he’s wrong.

86 Comments on "What Happened to Trinity Water?"

Sort by:   newest | oldest | most voted
Larry
Share On TwitterShare On Google

I have not bought a bottle of water since Trinity stopped being on the shelves. When it comes back I will buy it again.

wow this was a great water…..

Vote Up
0
Vote Down
Eric
Share On TwitterShare On Google

Jim doesn’t know what he is talking about, but I am sure you are a good guy, Jim, just uninformed, or mal-informed, however you want to put it. Hoping the owners will pull their heads out and get this water flowing back into the distribution channels for all us to consume!

Vote Up
0
Vote Down
Jim
Share On TwitterShare On Google

Trinity water lost the lease on the land the farmers were complaining of there crops being affected by the water source being messed with so they would not let Trinity renew their lease on the Water spring that is what happened.

Vote Up
0
Vote Down
Eric
Share On TwitterShare On Google
Okay, Trinity water was flowing into my stomach a couple of minutes ago. You are all correct, this water is delicious! Coming out of the ground at around 138F, letting it cool down a bit, then straight into the bottle. No humans messing with the properties of the water whatsoever. Source matters, it is coming from a gigantic granite batholith in Idaho. The bottom is said to be 2.2 miles deep! That is 11,616 feet! The carbon dating on the water puts it between 16,000 and 40,000 years old! Believe me, this water is coming back. Ahhhh, just took another… Read more »
Vote Up
1
Vote Down
hopeful
Share On TwitterShare On Google

when is trinity coming back … down to my last bottle here !!!

Vote Up
0
Vote Down
K8
Share On TwitterShare On Google

Was at Trinity about a month or so ago while out morel hunting, it’s still all closed up and sitting idle. Looks like a really kewl place though I’ve never tried the water. Sorry to all of you Trinity lovers.

Vote Up
0
Vote Down
Justitia
Share On TwitterShare On Google
Any further news on the sale of Trinity to the new owner and plans to bring the water back to market? I can’t believe it has been 3 years since this all started. I am down to my last 6 16 oz bottles of Trinity and just drink one when I feel like a good “bottle of wine” except it is water. I have to say — I’ve been drinking Essentia all this time and I have been extremely happy with it — even though it is not a natural but manufactured water. I definitely see the effects on my… Read more »
Vote Up
0
Vote Down
Diane
Share On TwitterShare On Google

I think that Trinity Water was removed because it plays an extremely benificial part in helping our bodies fight the effects of certain chemicals being forced upon us via the air we breath.

Vote Up
2
Vote Down
Saeed. A
Share On TwitterShare On Google

great news about the return of trinity ive missed it so much.there is just something very magnificant about the taste. cant wait for it to be back on the shelfs.